We are about to see a change in the safety legislation for safety signs. The current ISO 9010 is being replaced by PR EN 7010. Read below for further info.
The change will see safety signs in the workplace move away from being an ‘international standard’ (essentially a recommendation on best practice), to a European Norm (meaning the contents of the standard must be written into UK and EU Law). ISO 7010 has been developed to provide a consistency in design across the EU. By using common pictograms and symbols a universal recognition of safety signs will be encouraged. It will mean that a fire exit sign in the UK will look the same as it would in any other European country.

Many of the new designs are based upon BS5499 standards (a standard we have conformed to since its introduction in 2002). We have been phasing in the new designs throughout 2010 and you will notice some significant changes, whereas others will be tweaked to make them technically correct but look virtually the same as existing versions. 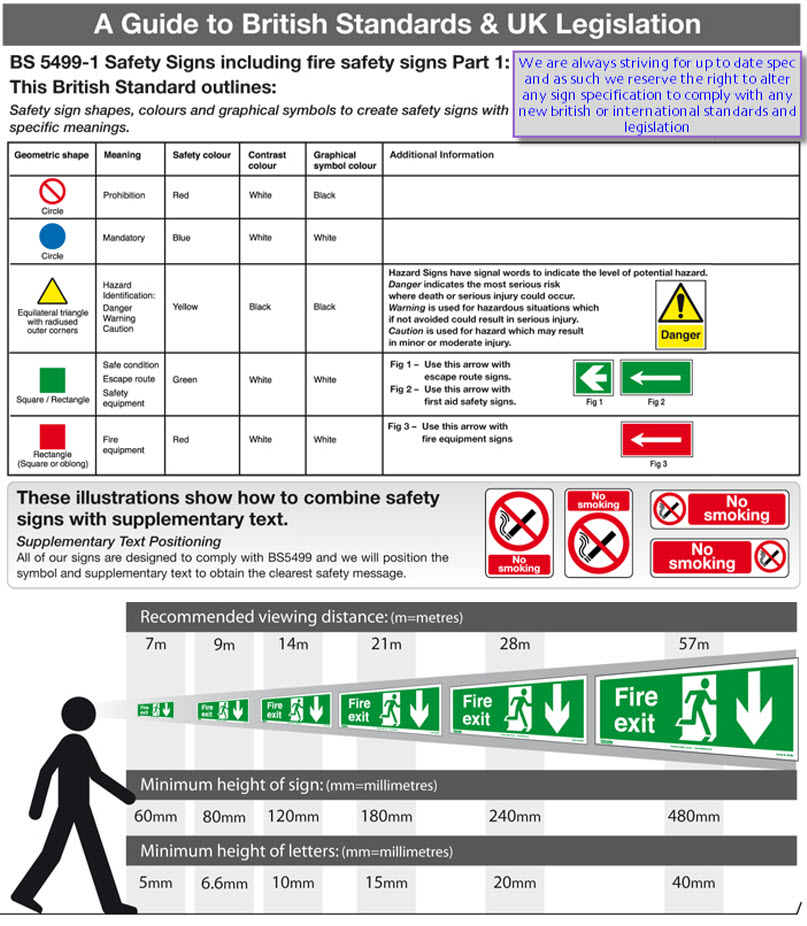 Why do we need these Regulations?

These Regulations bring into force the EC Safety Signs Directive (92/58/EEC) on the provision and use of safety signs at work. The purpose of the Directive is to encourage the standardisation of safety signs throughout the member states of the European Union so that safety signs, wherever they are seen, have the same meaning.

Some examples of the most commonly used signs appear in this leaflet:

The Regulations cover various means of communicating health and safety information. These include the use of illuminated signs, hand and acoustic signals (eg fire alarms), spoken communication and the marking of pipework containing dangerous substances. These are in addition to traditional signboards such as prohibition and warning signs. Fire safety signs (ie signs for fire exits and fire-fighting equipment) are also covered.

What do the Regulations require?

They require employers to provide specific safety signs whenever there is a risk that has not been avoided or controlled by other means, eg by engineering controls and safe systems of work. Where a safety sign would not help to reduce that risk, or where the risk is not significant, there is no need to provide a sign;

The Regulations apply to all places and activities where people are employed, but exclude signs and labels used in connection with the supply of substances, products and equipment or the transport of dangerous goods.

Do existing signs need to be changed?

In the case of fire safety signs, where employers decide that a previously acceptable sign is not of a type referred to in the Regulations they have until 24 December 1998 to replace it. All other safety signs now need to meet the requirements of the new Regulations described below.

A new requirement in the Regulations is to mark pipework containing dangerous substances, for example by identifying and marking pipework at sampling and discharge points. The same symbols or pictograms need to be shown as those commonly seen on containers of dangerous substances, but using the triangular-shaped warning signs, eg:

For most firms already using safety signs to warn and instruct employees of risks to their health and safety these Regulations are unlikely to impose any significant changes, because:

(Both A and B are acceptable)

Where evacuation from buildings is needed, the Regulations require the fire alarm signal to be continuous. Fire alarms conforming to BS 5839: Part 1:1988 Fire detection and alarm systems for buildings do not need changing, nor do other acceptable means such as manually operated sounders (eg rotary gongs or handbells).

My cart
Basket is empty
View or Checkout Secure checkout